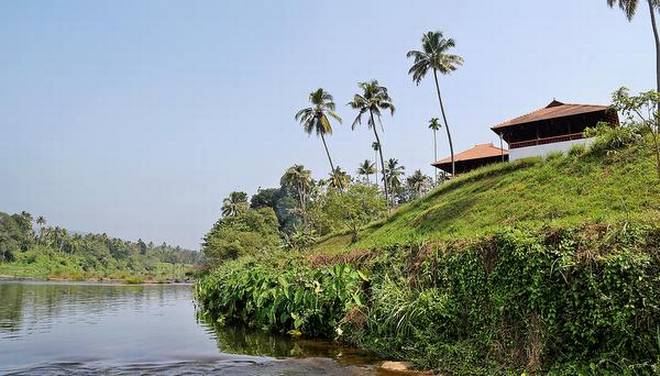 In a bid to connect Nature, food and community, chef and owner of the UK-based Rasa chain of restaurants, Das Sreedharan, has opened Rasa Gurukul, his resort in Chalakudy, near Thrissur. He wants the ‘Gurukul’ (a learning centre) to embody the culture of India, and get the youth involved in the mission for which it has been set up.Hence this property, developed as a self-sufficient village of his childhood “where everybody knew everybody”, is his way of perpetuating a truly Indian life style. “This is my way of making children understand the great qualities of a village, it has so much equality. It is also about creating a balance between the past and the present.”

The riverside property is a calming retreat from the ‘busy-ness’ of everyday living; the silence soothing.

From its windows, if you listen carefully, you will hear the Chalakudy river flow. It gurgles as it stumbles over the rocks in its path, while birds rest on them, wings spread wide, drying themselves. The wind rustles the leaves as it passes through the trees. Sreedharan has chosen the site for his life’s mission well.

I sit with my eyes closed as he tells me the story of a grain of rice. He wants me to imagine it, or more like see it through my mind’s eye. We make the journey back to beginning of paddy. The most dramatic part of the narration is of how the farmer sits by his paddy fields, ready for harvest, watching the sky with apprehension for any signs of the weather changing. The story of a grain of rice is also about a farmer’s fears and dreams, “it is the soul of the farmer, his ardent desire to make this happen for us. He is the star,” says Das.

Developing the 25-odd acre property has taken close to 15 years, from acquiring the holdings from a handful of families to consolidating the scattered pieces of land into a large expanse of vision and dreams. The farm retreat houses four cottages and 16 double rooms, around these is a growing garden of trees.

In the bucolic setting are grazing cows, bullock carts, and hens. Vegetables are farmed the organic way, indigenous varieties of rice are cultivated. Sreedharan says, “Indian cuisine is one of the oldest. The whole world is now turning to eating rice; it is a favourite food of the world. It has been an important part of our diet for so many hundred years!”

Children from neighbouring schools are brought to show them the old way of living, and guests (most of who are foreigners) are taken to the schools too. There are smithies—iron, black and bronze, and even a potter’s shed. For those looking for Ayurveda treatments, there is a well-equipped facility on the property.

Last year, around Christmas and New Year, a crafts village was organised to introduce guests to local crafts. Das plans to make this an annual event, expanding its scope; Das has scheduled a harvest festival around Onam this year.

A separate section (walking distance from the rooms), houses the dining area, which is dominated by a large mural of Das’ mother. His late mother was an important influence, he says, in shaping his outlook. It reflects in how he speaks—of Nature, of civilization—benevolent and all-embracing like a mother. The food is home-style, simply cooked, where one tastes each morsel and savours the nuances of flavours. The students of the Gurukul chip in with the cooking; for them this is a chance at a better life.

Urulis of various sizes line a wall in the kitchen and brass utensils (all of which are used in the kitchen) sit on shelves. In another part are variants of grinding stones, “very much in use.” Students at his Gurukul potter around, cooking and preparing lunch, wearing t-shirts that say ‘I serve happiness’. Placed around an inner courtyard, the anganam , are tables and chairs. This is not, for Das, a purely commercial venture, instead it is an attempt at preserving, and laying the foundation to retain and perpetuate Indian culture. If he were planning another Gurukul elsewhere, it would reflect the local culture and lifestyle and “preserve every bit of land, grow maximum food within one’s own region,” Das says.

Farm to table concept is a social movement which promotes serving local food and incorporates a form of food traceability, celebrated as knowing where your food comes from