Food is a source of ultimate happiness 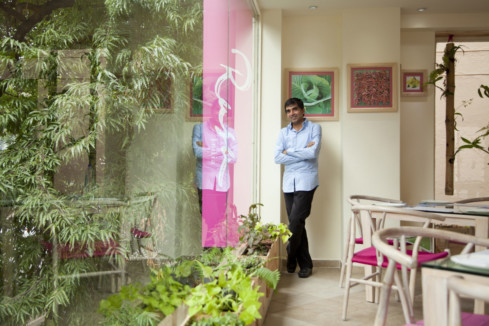 Das Sreedharan on the long and miraculous journey to setting up the Rasa chain of restaurants, and his plans on rekindling the delights of the farm-to-plate experience

With six restaurants in London and an organic vegetarian restaurant in Bengaluru, India, Das Sreedharan, the force behind the renowned Rasa chain of restaurants, is on a mission to change the way we live and think through the food we consume.

Food is more than just what you eat or put on the plate, believes Sreedharan, who grew up in a little palm-fringed village near Kochi, Kerala, as the youngest of four siblings. “Food is the fundamental light that ignites our soul. It is about emotions, love and nurturing. Food is what connects and reunites people across generations; it is a source of ultimate happiness.”

Sreedharan’s preoccupation with food commenced with his birth into a family where hospitality had a dominating influence. As proprietors of a family-run restaurant, or as Sreedharan insists, “a small tea shop”, located in the village centre that served as the haunt for weary travellers and hungry locals alike, it was here that as a young man he spent most of his waking hours keenly observing how strangers bonded over food and the transformational impact a delicious meal had on each person.

“Even after school, I would rush back here, amazed at how people from different social and economic backgrounds enjoyed an easy camaraderie as they ate at the same table. It dawned on me then that food was the common experience all these diners shared; it was what made them more open as they sat down to eat together,” he says.

The red, clay-tiled tea shop was very basic; with wooden benches and tables and no décor to speak of, he says. “It was not a place to linger on or soak in the ambience but its fading walls and chipped furniture were privy to countless stories of satiated stomachs and gratified souls. For me personally, it was the compelling power of food to connect people that drew me there every morning at 5.30 even as a young 5-year-old.”

Sreedharan grew up hearing tales of his grandfather whose gastronomic skills were legendary. “He was immensely fond of people who were hungry; it did not matter whether they had money to pay for the food or not. His only desire was to feed them.”

Sreedharan’s father inherited the same spirit and passion. “He literally lived in the tea shop,” remembers Sreedharan. “He also helped mum in the kitchen, and encouraged us to do the same.”

Naturally, at home too, Sreedharan could not distract himself from the world of food. He helped his mother and enjoyed watching as she picked out the fresh vegetables and herbs for the day’s cooking from their backyard. “She would always talk to the plants as she tended to them and from a young age I learnt that all of nature has life. I loved to watch her cook; the aroma of spices and the crunchiness of the fresh vegetables were imbued with oodles of love and emotion that she so generously heaped into each dish. The ensuing creation was flavourful and heavenly, to say the least.”

Despite his natural inclination towards the culinary field, Sreedharan was encouraged to study and get a job that would guarantee him a better life. A chef’s job was looked down upon, he explains. His urge to travel and take up a career in accountancy landed him in India’s capital, New Delhi, although he knew no one there and spoke neither Hindi nor English. “I was not cut out to be an accountant; I kept falling asleep on the job and got kicked out twice!” he muses.

With money running out, he took up a job serving tea in the street. “This was just one stop away from begging but it opened my eyes to what starvation is all about and how a square meal a day goes a long way in making people happy,” says Sreedharan. His infectious enthusiasm even as a roadside hawker caught the attention of a hospitality professional who offered him the job of welcoming and ushering in guests at a restaurant in a hotel. Within a year, he had risen to become manager of the restaurant.
For Sreedharan, this turn of events was nothing short of a miracle. “I believe in miracles,” he states, for it was here that he “met some incredible people who arranged for me to reach London”.

In London, Sreedharan slogged it out for two years in menial jobs such as cleaning and working at petrol stations before he got a job as a waiter at an Indian restaurant in 1993, which he eventually managed. This happiness was short-lived when an overnight change in management saw him out of a job again for more than six months. “This was a kind of awakening for me,” says Sreedharan, “to realise that from a powerful position you could end up with nothing. But I was optimistic and continued to believe in miracles.”

That miracle came in the form of a Pakistani butcher on his street who informed him of a restaurant that was up for sale. With not a penny in his pocket, but armed with a head brimming with ideas, a passion for food and a disarming smile, Sreedharan convinced the Jamaican couple who owned the restaurant to let it out to him on lease, and thus began the birth of Rasa, literally meaning “essence”, in Stoke Newington in 1994.

“I was appalled at the bizarre state of Indian cuisine at the time in London and saw this as an opportunity to set things right,” recollects Sreedharan, who had not yet recovered from the shock of realising that the gravy for a vegetarian and chicken dish were the same in the restaurant he worked earlier.

“The Indian food served in London restaurants and often prepared by Bangladeshi cooks bore no resemblance to the food I ate at home. India is the land of aromatic spices and flavourful foods and I thought it was unfair that the culinary image of my country was being tarnished in such a manner.”

Doing away with the darkened interiors that were a staple of Indian restaurants in London, Sreedharan chose instead to liven up Rasa in candy floss pink, which has since become the signature style of all his restaurants. As for the food, he ensured that they were prepared with quality ingredients and with the same love, care and thoughtfulness that his mother would devote to the food she made at home. Within a year, Rasa had acquired the tag as the most famous vegetarian restaurant in London, receiving rave reviews from critics and food lovers alike and winning several awards and accolades.

Jamie Olivier called him “the man England should learn to eat from”, while Indian cricketers and Bollywood celebrities including Sachin Tendulkar, A.R. Rahman and Aishwarya Rai flocked to this culinary haven. As Britons embraced the idea of Indian food beyond curry and chicken tikka masala, Rasa too diversified, with each new branch exploring the diversity of Kerala cuisine — ranging from seafood specialities to street food to signature delights of the Christian community and many more.

Along with Sreedharan’s gift for hospitality, it is his philosophy that food can make people think about life in a positive manner and his passion to share it with people around the world that is his dominating concern now.

His understanding of the spiritual influence of food on people and belief that food can bring about the essential positive energies to create harmony in the world stemmed as he witnessed the transformation on diners enjoying the light, simple and subtle flavours of his signature Kerala home cooking.

“I feel I have a responsibility to impart this understanding of the power of food that not only imbues us with a sense of fulfilment but also enhances our outlook on life and helps forge a deep connection with those we love,” says Sreedharan. “Today, people are disconnected with the ingredients that constitute their food. You pick up ingredients off racks in supermarket chains having absolutely no idea how it is grown, where and what makes it thrive.

“It was from observing my mother that I first learnt how food links us more closely with nature, and why we need to respect the environment in which we grow and harvest our ingredients. Cooking is not just about putting edible food on the table; we have to know our ingredients right from their ‘birth’. Being part of this incredible chain of farming, gardening and cooking is to experience something very basic yet very profound.”

It was to translate this vision into reality that Sreedharan conceived Rasa Gurukul, a centre for culinary excellence, hospitality and culture, on a picturesque riverside farm he owns in central Kerala. Set amid the backdrop of the raging Chalakudy River, the organic farm replete with seasonal fruits, vegetables and perennials is the pivot around which the Gurukul operates. It is here that students of the culinary school begin their food journey by first exploring the language of the soil as they understand how food is grown and raised before they are taught the skills and techniques to cook with these ingredients.

“The traditional mode of cooking, ingredients and dishes will fade away if we fail to act now,” explains Sreedharan. “All of us are born with a purpose; perhaps it is my destiny to help carry this knowledge forward. Here at Rasa Gurukul, you can learn, engage and experience the simple delights of carving out a farm-to-plate lifestyle.”

Sreedharan is at present training 20 orphans handpicked from across the nation in the skills of traditional cooking methods and dishes. The Gurukul will formally open in November this year. “It has been a long-cherished dream to help the underprivileged, and by training these youth in the culinary arts, it is my hope that they will pay it forward by opening 20 restaurants and offering opportunities to more underprivileged youth.”

Visitors to the Gurukul can also stay on and partake in the daily activities on the farm, the dairy and in the kitchen; indulge in yoga, meditation, and traditional music and dance. An open stage will also host festival and cultural programmes while students can also learn the art of pottery and other Kerala-based crafts from visiting artisans.

“It is a holistic centre where people can imbibe knowledge in many disciplines. The whole experience is that of the rural village life marked by simplicity and contented living. Through relaxed but deeply engaging daily schedules that involve elements of community living and fosters a culture of sharing coupled with the tradition of good, wholesome food, we can rediscover our true selves, reconnect with each other and come to experience the essence of pure happiness all over again.”